NASHVILLE, Tenn. — The Titans/Oilers franchise has picked from the 11th spot two times in the history of the NFL Draft.

The Houston Oilers selected Morris Towns, left, in 1977 and Richard Johnson in 1985 from the 11th overall spots in those NFL Drafts.

The Houston Oilers picked 11th overall for the first time in 1977 and selected tackle Morris Towns out of Missouri. Houston also selected defensive back Richard Johnson out of Wisconsin at the 11th spot in the first round of the 1985 NFL Draft after acquiring the pick in a trade made Oct. 9, 1984, with New Orleans for Hall of Fame running back Earl Campbell, who had been selected with the first overall pick of the 1978 NFL Draft.

Towns moved up the depth chart after his rookie season and became a starter in 1978. He made 66 starts in 88 games he played with Houston over seven years. Towns became a fixture at right tackle where he helped Campbell lead the NFL in rushing 1978-80 and score 45 rushing touchdowns in those three seasons. Towns helped the Oilers make three straight trips to the playoffs and consecutive appearances in AFC Championship games after the 1979 and 1980 seasons.

Johnson made 37 starts and played in 98 games over the course of eight pro seasons (all with the Oilers). He started all 16 games in 1990 and recorded a team-best eight interceptions that he returned for 100 yards and a touchdown. The eight interceptions ranked second in the NFL that season.

Johnson was a member of six Oilers teams that made the playoffs (1987-92).

The Titans are scheduled to pick from the 10th overall spot on April 25 in this year's NFL Draft and have nine selections overall during the three-day event.Click here to visit Titans Draft Central. 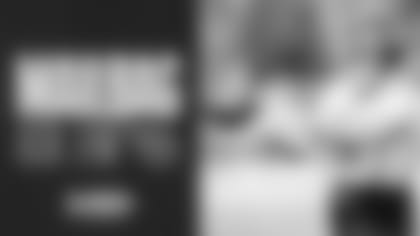 In the team's minicamp alone, Okonkwo caught three touchdowns in the red zone on Day 1, and followed it up with a touchdown grab on Day 2 of minicamp.

The Tennessee Titans have selected Shift4 (NYSE: FOUR) the leader in integrated payments and commerce technology, to process payments for its food and beverage concessions and retail sales at Nissan Stadium.

This year's Amy Adams Strunk Women in Football intern is Chesney McClellan. She is a former Auburn volleyball player, who is currently pursuing her master's degree at Belmont and is a graduate manager for the Bruins baseball team. McClellan will assist in scouting and operations during the Titans training camp.

This offseason, Tannehill has been joined by veteran receiver Robert Woods, acquired in a trade with the Rams, and veteran tight end Austin Hooper, formerly with the Browns. The team drafted receivers Treylon Burks and Kyle Philips, while also selecting tight end Chig Okonkwo.

Senior Writer and Editor Jim Wyatt tackles questions from Titans fans as the team wraps up a minicamp week.

Titans Edge Rusher Bud Dupree Feels Great, and He Plans to Take His Play to Another Level in 2022

A first-round draft pick of the Titans in the 2019 NFL Draft, Simmons is coming off his first Pro Bowl season. Simmons recorded a career-best 8.5 sacks in 2021, and he led the Titans with 58 quarterback pressures. Simmons also ranked second on the squad with 12 tackles for loss.

The Tennessee Titans today announced that the Titans Foundation and the Nashville community collectively raised 20,890 meals during its week-long food drive in honor of "615 Day," celebrated annually in Nashville on June 15.

Amani Hooker at Minicamp | Mic'd Up

Ryan Tannehill at Minicamp | Mic'd Up

Picking Up Where We Left Off | Denico Autry Media Availability

Figuring Out Who Does What Well | Taylor Lewan Media Availability

Control What I Can Control | Josh Malone Media Availability

My Job is to be a Player, be a Leader | Jeffery Simmons Media Availability

We Tell Them Everyday it's a Competition | Anthony Midget Media Availability

Right Now, Getting a Feel for the System | Luke Steckel Media Availability

Get Better At the Little Things | Craig Aukerman Media Availability

It Starts with Operating the Huddle | Malik Willis Media Availability

Everything We Do is Strategic | Nate Davis Media Availability

Kevin Byard at OTAs | Mic'd Up

Be the Guy that Earns That Spot | Dillon Radunz Media Availability

Stay up to date with team and stadium news, concert and event announcements, stream live Titans games and more!

A one-stop shop for Titans memorabilia, autographed items and more!

Get Titans news sent straight to your inbox.

facebook titans
instagram titans
snapchat nfltitans
twitter titans
youtube titans
email Email Newsletter
Advertising
The browser you are using is no longer supported on this site. It is highly recommended that you use the latest versions of a supported browser in order to receive an optimal viewing experience. The following browsers are supported: Chrome, Edge (v80 and later), Firefox and Safari.