Outlook:Titans general manager Ruston Webster and coach Mike Munchak vowed the team would make multiple efforts to improve on the offensive line and believe that the team has done so by adding depth and experience in free agency and talent in the NFL Draft. Tennessee signed free agent Andy Levitre (expected to start at left guard) and drafted Chance Warmack (expected to start at right guard) with the 10th overall pick and center Brian Schwenke in the fourth round.

The Titans started six different combinations of offensive linemen in 2012 as injuries mounted.  Four of five projected starters when the 2012 training camp began finished the season on injured reserve, and Fernando Velasco was the only player to start all 16 games. An emergency appendectomy struck left tackle Michael Roos, costing him a game and ending his streak of consecutive starts at 119.

David Stewart, the bookend to Roos at right tackle, has recovered from a broken leg he suffered in December. Behind Roos and Stewart, the Titans have veteran Mike Otto and Byron Stingily, who each saw playing time in 2012.

Additionally, the Titans added veteran interior offensive linemen Rob Turner and Chris Spencer in free agency which increases the versatility and amount of experience at the guard and center positions.

Things to watch at open training camp practices: The projected starters of Roos, Levitre, Velasco, Warmack and Stewart didn't have the opportunity to take the field together during the offseason program because the Titans were cautious with the linemen as they recovered. It will be interesting to see how quickly their on-field chemistry develops. There will be some periods where offensive and defensive linemen engage in intense competition drills that allow a better view of the challenges linemen encounter than one can see when the whole team participates.

Scheduled practices that are free and open to fans (subject to change): 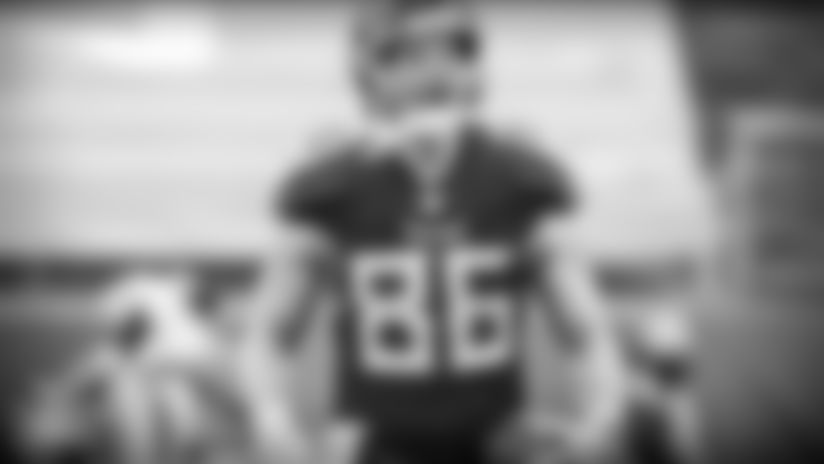 This week in Nashville, Firkser will be surrounded by the best tight ends in the game during George Kittle's Tight End University (TE U), a three-day retreat that should promote growth.

Senior Writer and Editor Jim Wyatt tackles another batch of questions in this Tuesday's mailbag.

Members of the Titans rookie class took part in a "Titans Rookies Read" story time event on Monday at the Nashville Public Library Bordeaux Branch. The event featured a read-along and Q&A with children on their favorite books and reading habits in support of GELF's "Stop the Slide!" summer reading campaign.

Henry, named the 2020 NFL Offensive Player of the Year by the Associated Press last season after leading the NFL with 2,027 rushing yards, returned to Nashville to take part in this week's minicamp. Not surprisingly, he still looks hulkish, thanks to months of training since the end of last season.

To make room on the roster, the Titans waived linebacker Justus Reed.

Lost for the 2020 season with a torn ACL last October against the Texans, Lewan had surgery and has been working his way back since.

Legends at Alabama, Teammates With the Titans: RB Derrick Henry Thrilled With the Addition of WR Julio Jones

Count running back Derrick Henry among those thrilled with the recent addition of receiver Julio Jones, a seven-time Pro Bowler who joined the team via trade earlier this month.

Observations From Titans Minicamp on Wednesday

The Titans his the field at Saint Thomas Sports Park for Day 2 of this week's minicamp. Senior Writer/Editor Jim Wyatt takes a look at what stood out from the session.

In recent months, Dupree has rehabbed in both Arizona and Atlanta, where's he's also done a lot of training. He's been back and forth to Nashville, looking for a place to live. He's spent a lot of time on zoom meetings with coaches and teammates.

Observations From Titans Minicamp on Tuesday

The start of the minicamp meant the offseason practice field debuts for several players, including running back Derrick Henry, cornerback Janoris "Jackrabbit" Jenkins and guard Rodger Saffold, among others.

Seven-time CMA Entertainer of the Year Garth Brooks will return to Music City on July 31 in his first-ever concert at Nissan Stadium, home of the Tennessee Titans.